Come Spa With Me!

It was our first visit to The Well – the huge dayspa that opened less than two years ago. The spa is situated in the middle of nowhere (in Kolbotn) 20-25 minutes outside of Oslo and supposedly the biggest dayspa in any of the Nordic countries. And that’s not the only thing special about it. At The Well, clothing is optional every day in the week except Tuesdays. On Tuesdays swimwear is required, unless you’re in one of the many saunas – where everyone has to be naked no matter what day it is.

I myself, I had never really been naked in public before. Except from the time when I was 9 years old and my nudist wannabe dad brought me to the Maspalomas desert to sunbathe among the dunes surrounded by fat, old naked Germans. Well, I just guess they were German. It’s not as if I had longer conversations with them. I still remember this childhood memory because it was such an absurd experience. Once and never again.
Until now…

It’s not that I’m very shy. It’s just not very Norwegian to throw your clothes off every now and again and walk around freely. We are a little bit too inhibited for that. I guess the same goes for the Swiss. So neither André or me had been naked in public until this cold and dark Saturday in February 2017, when we had decided to try the naked spa. We had considered bringing swimwear just in case. But the Well has this special rule, that you either have to buy their swimwear or go naked. They claim this rule is due to hygiene reasons. Because their their bikinis are specially made for the spa and they dry faster than normal swimwear. According to a friend of mine this is actually true, but the main reason is probably business. After all the spa is owned by Norwegian zillionaire Stein Erik Hagen, who likes to walk around naked while earning money. Because nothing comes free at the Well. Entrance costs between 295 NOK and 495 NOK (for a whole day) and if you want spa-treatments you have to pay extra for this, like you have to do in most spas. Not even water comes for free! Or this is not exactly true. The water you can have for free – but you have to pay for a glass or bottle to put it in. Bringing your own? Forget it! It’s the rule.

The Well have many of them. Which gives me slight flashbacks to institution life, where a long list of rules (some more meaningful than others) is part of everyday life. A concept which brings out the defiant child in me. Or naughty teenager even. But so far I was handling the amount of rules. It helps to be mentally prepared…

Finding it hard to find swimwear our size in normal shops, we doubted that the standardized swimwear was a good idea. So we had decided to go full monty. Besides – the rule in the saunas was clear: No swimwear! And who wants to take on and off a wet sticky bikini every 5 minutes anyway? At least not me. That’s way too much hazzle.

I was very curious how I would react to the nudity though. And how people would react to my body, which is not exactly standard. And would all the people there be nude? Or only a few? So many questions about to be answered…

“Don’t worry – almost everyone is naked, so you don’t feel that weird there” a naturally shy friend had told me. So I managed to convince both myself and André that this was going to work out perfectly fine. However when we came into the main pool area (Wellness Pool) we saw something quite disturbing. They were all wearing bathing suits! We scanned the dim ligthed area and could hardly see anyone lowering their naked body into the pool after removing their towel (or peshtemal that is also possible to buy). “We’re the only ones naked!” I thought hiding behind my towel and seriously considered to abort the whole mission. Either my friend had fooled me or the people who go to spa in the week-ends are more shy.

After a short strategic discussion, we decided to go for it anyway and do a recognition round to check out the facilities. The first thing we discovered was that the main pool (Wellness Pool) had many steps to enter (maybe 10-12). Probably to make it as discrete as possible for the people swimming around naked without being stared at from the people in the lounge right next to it. But it made me kind of disappointed.

The Well was built recently, which means the Disability Access Law from 2010 applies. And when the staff spotted us, they quickly began to reassemble the wheelchair hoist to get into the pool. And despite my scepticism against mobility aids that are not used on a daily basis, it actually worked! It was only one problem…

The pool hoist was white, huge and making a loud (at least in my head) beeping noise. And in order for you to get from the floor level and into the pool you first had to take a big “flight” up in the air, with the help of the staff. Which meant you would be visible for EVERYONE in the whole wide room. Including the people sipping to a glass of chablis in the lounge bar. Even with clothes on I would freak out using that thing. And naked it was….not an option. Not. Not. Not.

The staff guy approached us visibly proud that they had the technical stuff in order.
Guy: “Do you want to enter the pool? We have a pool hoist and we will help you.”
Me: “Uhm, I think we want to check out the premises first. And maybe we just climb the steps instead.”
Guy: “But it’s much safer for you to use the hoist. That is why we have it!”
Me: “Uhm yeah. It’s great that your place is accessible. It’s just that….we….want to take a look around first.”
Guy: “So you promise to find me when you want to enter the pool, right?”
Me: “Uhm yes of course!”

Liar liar, pants on fire! But they were not on fire.
Because I didn’t have pants on…remember?
Unfortunately…

We went upstairs to check out what was on the third floor. The good thing about The Well is that the normal elevator is situated within the spa itself, making it very easy to move between the different floors. On the top floor they have different saunas both indoor and outdoor and a quite big outdoor pool, which is only open in summer season. There were some jacuzzis outside, but they also had a few steps to enter. And with 2cm of snow on the ground, steps was not really an option. So the only thing we found, which we could test outdoor, was a low heated pool just in our height, making it possible to slide over to the edge from the wheelchair seat. The low pool was called a Japanese Onsen. And compared to the pool downstairs, most people were actually naked out here. So we didn’t feel that freaky. And the Onsen experience was actually nice. To sit watching the forrest outside in February in a pool that holds 38-40 degrees celsium was pretty relaxing. And I had an interesting discovery connected to the nudity concept. Because when the majority is naked – nobody stares at your body! They don’t dare basically. So the normal curious stares you might get in a swimming pool as a disabled person were not there. People were minding their own business. Being mindful as hell of course. But I kind of liked it…

The bad thing of bathing outside in February is that you actually have to go inside again. And the air is freezing. Not to mention your wheelchair. But we survived. We heated ourself up again in some of the many saunas. Some easy to enter with the wheelchair and some not (because of the layout). We also tried the grotto (kildebad), which is a pool with pure mineral water holding around 36 degrees. You can bring your wheelchair into the grotto room, but make sure you have breaks on!

One of the attractions the Well are the experience showers. But unless you have a wheelchair that can handle water, these are naturally not accessible. And since some of the saunas have limited access, my conclusion was that even if The Well is socalled universally designed, there are not that many of the attractions you can actually enjoy when you’re in a wheelchair. Especially not in winter time.

Eventually we tried the normal pool also (Wellness pool), by climbing the steps wrapped in the already pretty wet towel. And it was ok. The lighting above the pool area is blue, misty and very comfortable. So you cannot really see that much nudity as you would expect. And the people who are outside the pool are not tall enough to see in. And it IS a special experience swimming around naked, with “everything hanging loose”. However the Wellness pool is not really a swimming pool. It has many different sections with different jetstreams and massage thingies spread around. But I personally prefer to have the possibility to go for a swim when I visit a spa. So when we had tried out the pool I exchanged my very wet towel with the slightly too big bathrobe and we had a glass of wine in the bar in front of the fireplace. Trying not to stare too much in the direction of the tropical sauna. Because of the naked people there. Only a glass wall between them and me… 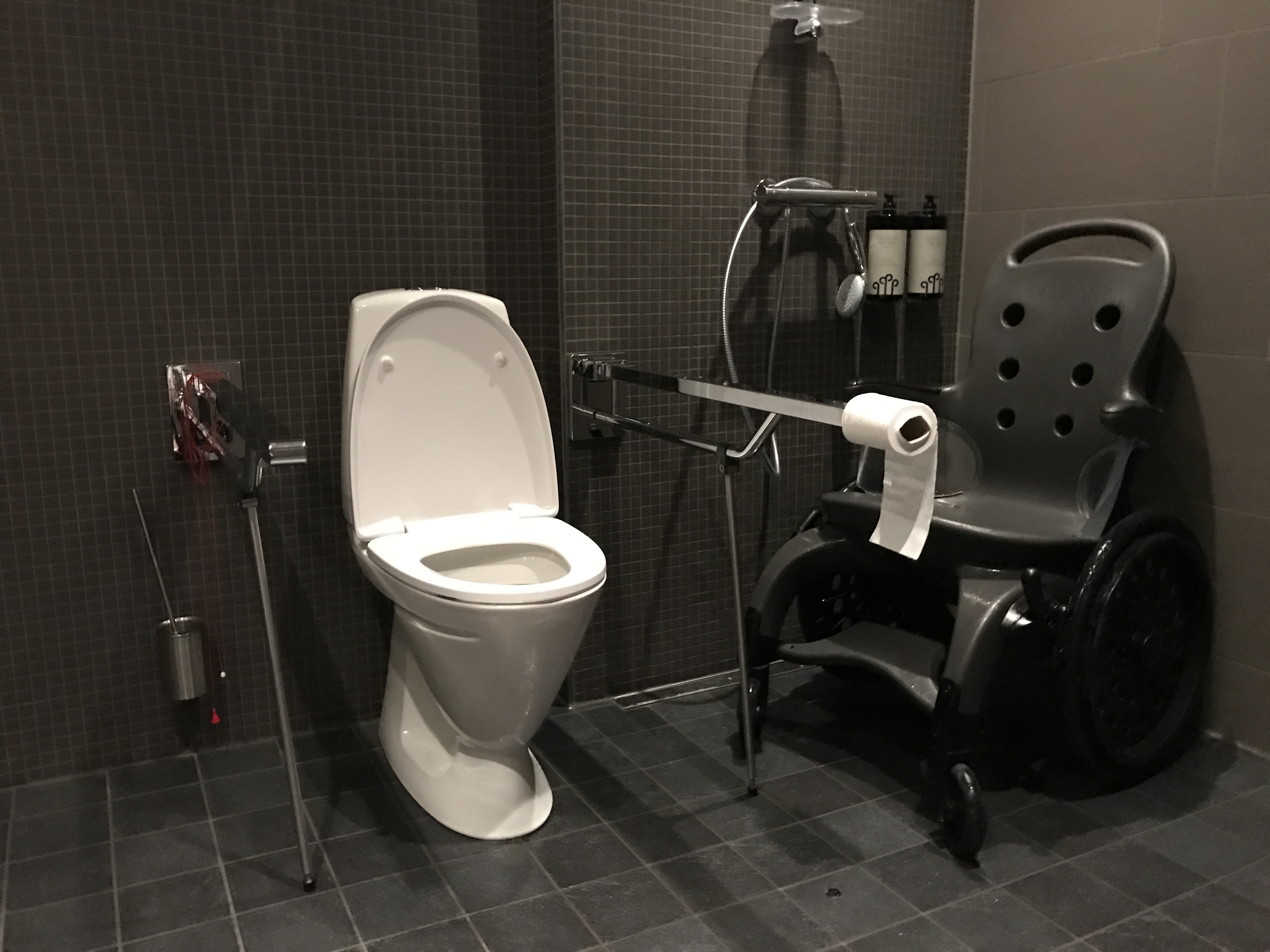 After the wine glass we decided to leave The Well and go home. Will we ever go back? Yes, maybe once to try it out in summertime. But it will never be one of my favourite spas because of the way to access the main pool. I’m also not a big fan of all the rules, the stiff prices and the fact that you cannot spend the night there – making it impossible to change in your own hotel room. In the Well you have to use the handicap toilet to have an accessible shower. They do provide wheelable shower chairs in both the men’s and the women’s section. It took some time for them to organize though. And unfortunately the plastic wheelchairs was one size. Meaning too BIG!

So I prefer other spas. During the last 5 years, I’ve tried quite a few of them within 2,5 hours driving distance from Oslo. Six of them I regard as partially or totally accessible for wheelchair users. And here is my verdict on which ones are the best and the worst:

Follow Wheel the World to read pros and cons about the different places.

Until then: Relax! Take it easy…