This summer I went swimming,
This summer I might have drowned
But I held my breath and I kicked my feet
And I moved my arms around, I moved my arms around.
Loudon Wainwright
André moved to Norway in March 2017, meaning that winter 2018 was the first he got to experience in Oslo. And little did I know how bad it was going to be. Snow came early and it just never went away! And we got tons and tons of it. A snow record actually. We had not had that much snow in Oslo for 35 years! In the end, the trucks did not know where to put it. The snow storages were all full and the budget for clearing away snow was blown many months ago.
And the worst thing was…the snow never went away. Usually in March we can see the light at the end of the tunnel. But no. The snow stayed and stayed. And even ski loving friends and colleagues of mine, began to complain, telling me they were longing for spring. And even worse…we didn’t have a single plane picket to fly away from the white nightmare and spend a week or two at a sunny & therapeutic place.
Not until April did we get rid of the disgusting white cover. Then we enjoyed some short and intense weeks of spring, until summer 2018 exploded in May. We got tropical temperatures and sun, sun, sun. And this is how it continued. May, June and July was more or less one long period of sunshine, heat and swimming. Unforgettable and deserving of a blog post, don’t you think?
In the beginning we were just euphoric and enjoying it with every inch of our body. We ignored emails, to do lists and spent as much time as possible outside. Because we thought – this can never last. If you have tropical summer in the beginning of May, it’s bound to give you a backlash at some time.
But no, the backlash never came. Except for the few rainy days we had in June, when we had visitors from Switzerland. Talk about bad timing! After a while we just got used to it. And at some point it got so warm that the only sensible place to be, was the beach. I’ll remember the evening swim we had at Malmøya for a very long time. How often can you take a sea bath after seven o clock in the evening in Oslo without freezing? Never…
On a sunny day the sea bath at Sørenga looks more like a pile of ants (first photo with a view from from Ekeberg restaurant)
So the challenge in 2018 actually consisted of finding a free spot at the beach. Oslo have many opportunities for swimming both in lakes, outdoor pools, the river and the ocean. But this summer the water was full. It was crowded. Pretty crazy…
Enjoying sunshine & waves at Solvikbukta…
But fortunately we do know about some hidden secrets and accessible beaches. We managed to enjoy 2-3 beach days at Malmøya for instance, before the summer storm came and took the universally designed ramp.
My best suggestions when you want to find an accessible place for taking a swim in the Oslo area and surrounding is:

There are also some good websites with advice on where to find accessible places to swim or take sunbaths in Oslo: 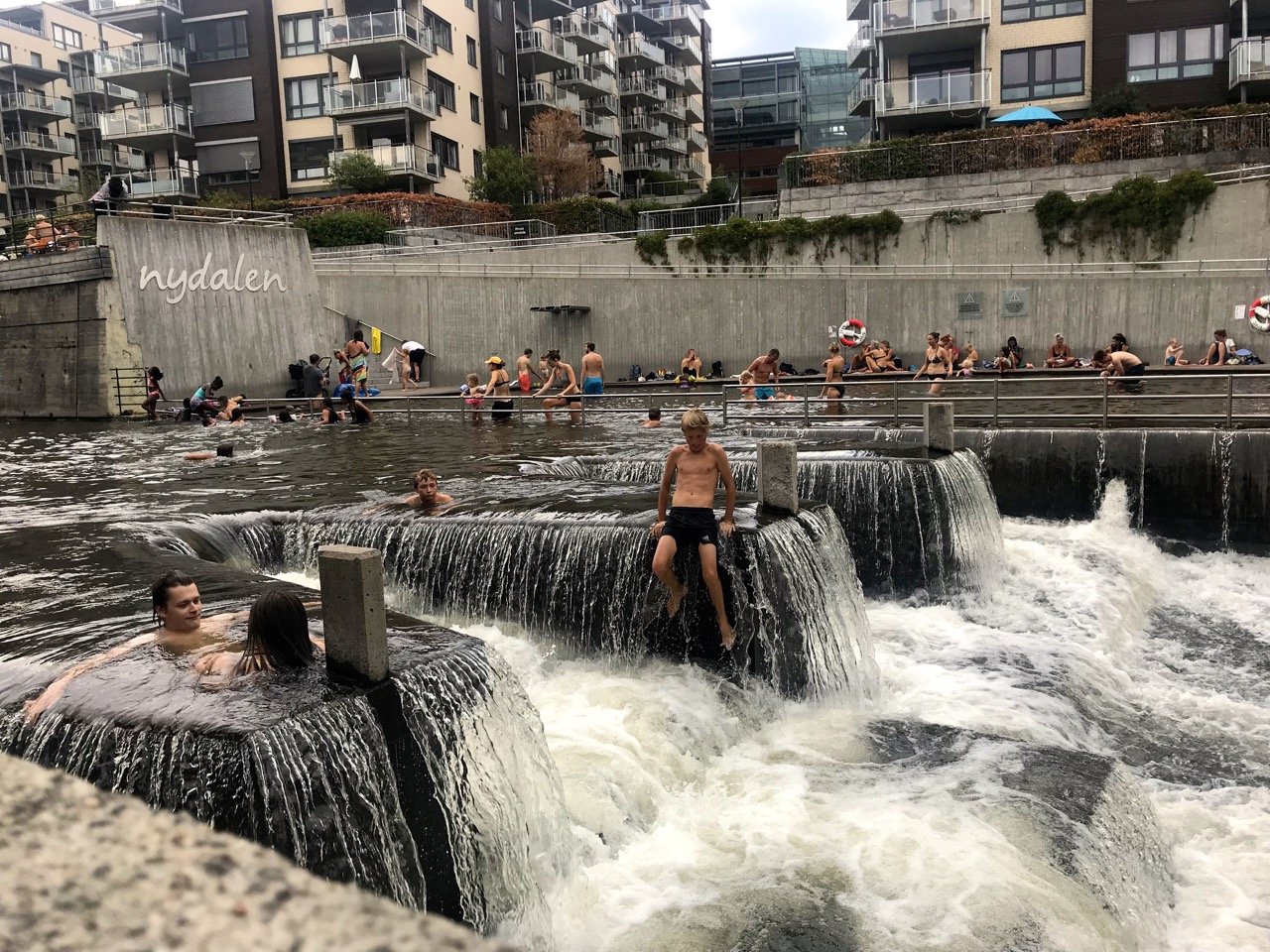 Nydalen badeplass in Akerselva river is accessible via a ramp
And here’s some more photos to illustrate the crazy summer of 2018:
This summer I swam in the ocean,
And I swam in a swimming pool,
Salt my wounds, chlorine my eyes,
I’m a self-destructive fool, a self-destructive fool.
Storøyodden beach – read more about wheelchair access here
This summer I swam in a public place
And a reservoir, to boot,
At the latter I was informal,
At the former I wore my suit, I wore my swimming suit.
At Tjuvholmen you can have a glass of wine, do people watching, visit art galleries & museums, chill at the beach (not accessible) or take a swim at the sea bath (doable for some). Or do some sightseeing with your unicorn floating device if that’s your thing…

Wheeling Oslo – The Secrets (The House)