Your table manners are a crying shame
You’re playing with your food, this ain’t some kind of game
Now, if you starve to death
You’ll just have yourself to blame
So eat it. Just eat it!

A: What are we having for dinner tonight?
Me: I don’t know (same answer in 99% of the cases). What’s in the fridge?
A: Not so much…
Me: Do you really want to cook at home? Then we have to shop also…
A: I could cook, but I don’t want to clear up the mess afterwards. Do you want to do that?
Me: Not really. Wanna go out for dinner?
A: Yeah!

Fortunately for us lazy foodies, it’s pretty easy to find a good restaurant in Oslo nowadays. Even if you get around with an electrical wheelchair. When I moved to the city 23 years ago it was on the contrary hard to find accessible restaurants; especially if you needed an accessible toilet (which were mostly used as storages). And if you had friends who also used wheelchairs, it was usually too crowded most places. I was so annoyed by this, that I ended up making a list of accessible restaurants and toilets, which I published online. Unfortunately it was almost impossible to keep it up to date. The turnover in the restaurant business in Oslo is crazy. So you have to pay attention of what’s hot or not. Or closed…

But times are changing for the better. The need for my alternative restaurant guide is not the same anymore. And things especially changed after the Anti Discrimination Act & the New Building Construction Act came in 2010. All new buildings must now be accessible. And if you do major changes to an older place, you have to make that accessible too, even if it requires extra investments.

So today there is a lot to choose from no matter what cuisine you’re fan of or how thick your wallet is. The challenge now is to find the best restaurants, since everything is changing so fast. Not even the restaurant columns in the newspapers can keep up. So I decided to do a list again…

Here it goes – a list of my favourite restaurants in different genres with complete wheelchair access and accessible toilets (as usual I wouldn’t put too much weight on the ranking order…..soooo hard to choose):

Cargo
And the winner is….Cargo! Some might think it’s a strange winner – because Cargo is not really fantastic. It’s just really really good. The popular restaurant is huge and perhaps not super charming. But they have very tasty food (especially the pasta), good wheelchair access and a fantastic location in the summer months. A good place for people watching. And where else can you see fantastic sunsets in the harbour area half past 10 in the evening, while sipping to a glass of wine or a nice cocktail?

Recommendation: Lobster linguine (to share) with meringue icecream for dessert.

Aymara
We just discovered Aymara a few weeks ago and it was love at first bite. If we should complain about something, it would be the service which was a bit zombie. But Aymara’s Peruvian food and drinks were great. And the ambience is just very very nice and feelgood. Situated on the central West side (south of Solli plass), you might spot some celebs too. So make sure to book a table in advance!

Want to try a slightly cheaper and more laidback version of Peruvian kitchen? Go to Nikay in Folketeaterpassasjen! Toilets can be found in the hotel next door.

Brasserie Paleo
Usually hotel restaurants are charmless and boring. But Paleo has found the recipe to please both hotel guests and the locals. Paleo serves socalled stone age food, which typically includes vegetables, fruits, nuts, roots, and meat while excluding dairy products, grains, sugar, legumes, and processed food. I’m not a health freak when it comes to food, but the meals at Paleo both looks and tastes like an art piece. And they do spectacular vine tasting dinners once a month, where you can learn about the changing character of wine depending on the food you drink it with. Almost impossible to find information about the wine tastings on their webpage though. It’s a bit of a secret. Shhh, don’t tell anyone!

Nodee Barcode
We have tried both Nodee Sky and Nodee Barcode (ground floor) and my personal favourite is Nodee Barcode. It’s less pretentious and all the courses in the tasting menu were great. This included the creme brulee I managed to squeeze down even if I was full. Service is good and professional and they have the nicest accessible toilet. Nodee is a good place for people watching unless you want to be romantic and sit in a more secluded corner, which is also possible.

A good competitor in the same genre is Mr. Bay at Tjuvholmen, which because of their Steak “Xate” has been one of my favourites for many years. But you need help from the staff to enter the back entrance at Mr. Bay, so I decided to list Nodee instead.

Postkontoret
When we don’t want to cook in the middle of the week, we go to Postkontoret in Tøyen. It’s pretty close to where we live and they serve some of the best Italian pizzas in town. The place is closer to a bar than a restaurant and it’s more or less always full of hipsters and couples on more or less successful dates. Many of the tables are high or have steps, but they do have 5-6 smaller tables that are possible to use with a wheelchair. Service is low key. Order in the bar and pick up the food yourself when the gadget beeps. But staff is always friendly and it’s not very expensive.

Good alternatives in the neighbourhood includes Grådi and Nord & Natt (both accessible). And a competitor in the pizza department is Il Vero in Barcode. Charmless place, but their pizzas are very good!

Stock
“What kind of food do they serve here?” said the taxi driver when he let us out in the middle of Barcode. “Hmm, just normal fish and meat dishes”, I said. “In normal portions”. Because I have to admit it. I’m a bit tired of the sharing menu concept, which is more or less a plague haunting all the Oslo restaurants. Sometimes I just want to go out and order a main course and know how much food I will get. Keep it simple stupid! It does not mean that the food is simple at Stock. It’s both tasty and well presented and service is great. Make sure you taste the home made knekkebrød with cream butter you get before the meal. It’s delicious! 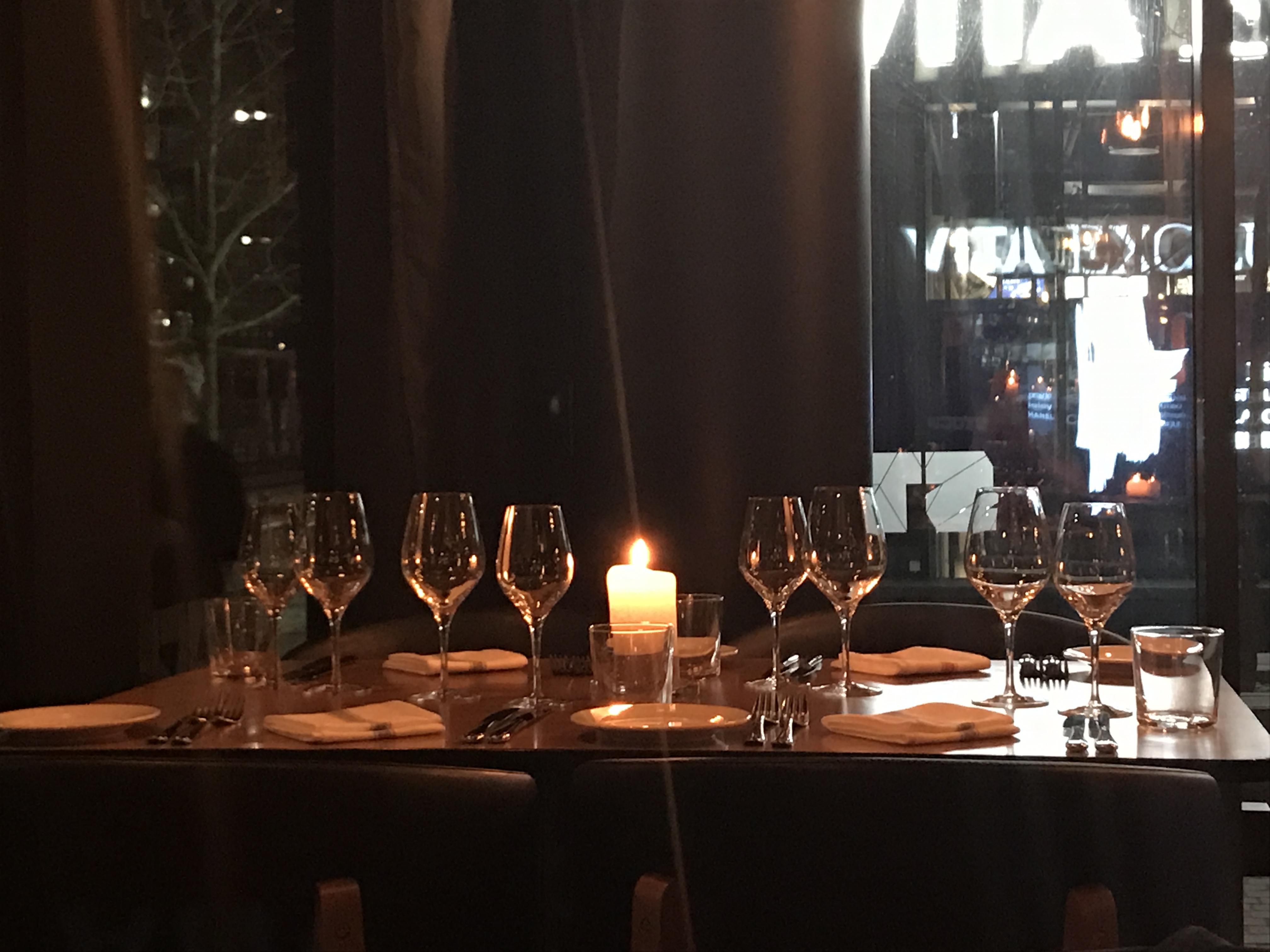 Stock is a romantic and pretty quiet place – suitable for a good conversation (or the hearing impaired). And it’s not too difficult to get a table in the week-ends. Make sure you tell them that you are in a wheelchair if you prebook however – many of the tables are not accessible because of height or steps.

Want a cheaper alternative with a slightly similar concept? Try Pila! A hidden jem in the basement of DogA – the centre for design next to Cultural Church Jakob.

Recommendation: Whale (yes, we do eat it here) for starters and deer for main course

Südøst
The Südøst Asian Crossover has been one of my favourite places for years.

Food is not fantastic schmantastic, but tasty and good value for money. And the ambience is very nice in the high ceiling room with a fireplace, which was housing a bank in the older days. Especially the tasting menus (345 or 485 NOK) gives you a lot of food for a reasonable price compared to many other places in Oslo. You can bring your best friends here and pay for them without going bankrupt. Start or finish off the meal with one of the many good cocktails. In party mode? Head down to the nightclub in the basement afterwards – where you can party all night long.

Looking for other places to eat that will not burn a hole in your wallet? Check out Vippa or Mathallen (The Food Court), with their many small booth alternatives.

Champagneria (Mathallen)
Everything tastes good in Champagneria, which is situated in Mathallen (The Food Court). The restaurant is small and has only a few low tables. But it’s possible to fit at least two wheelchairs at the same time. They serve classic Spanish tapas and toilets can be found in the basement of the food court. Service is usually friendly.

Recommendation: Try everything! It’s all good… 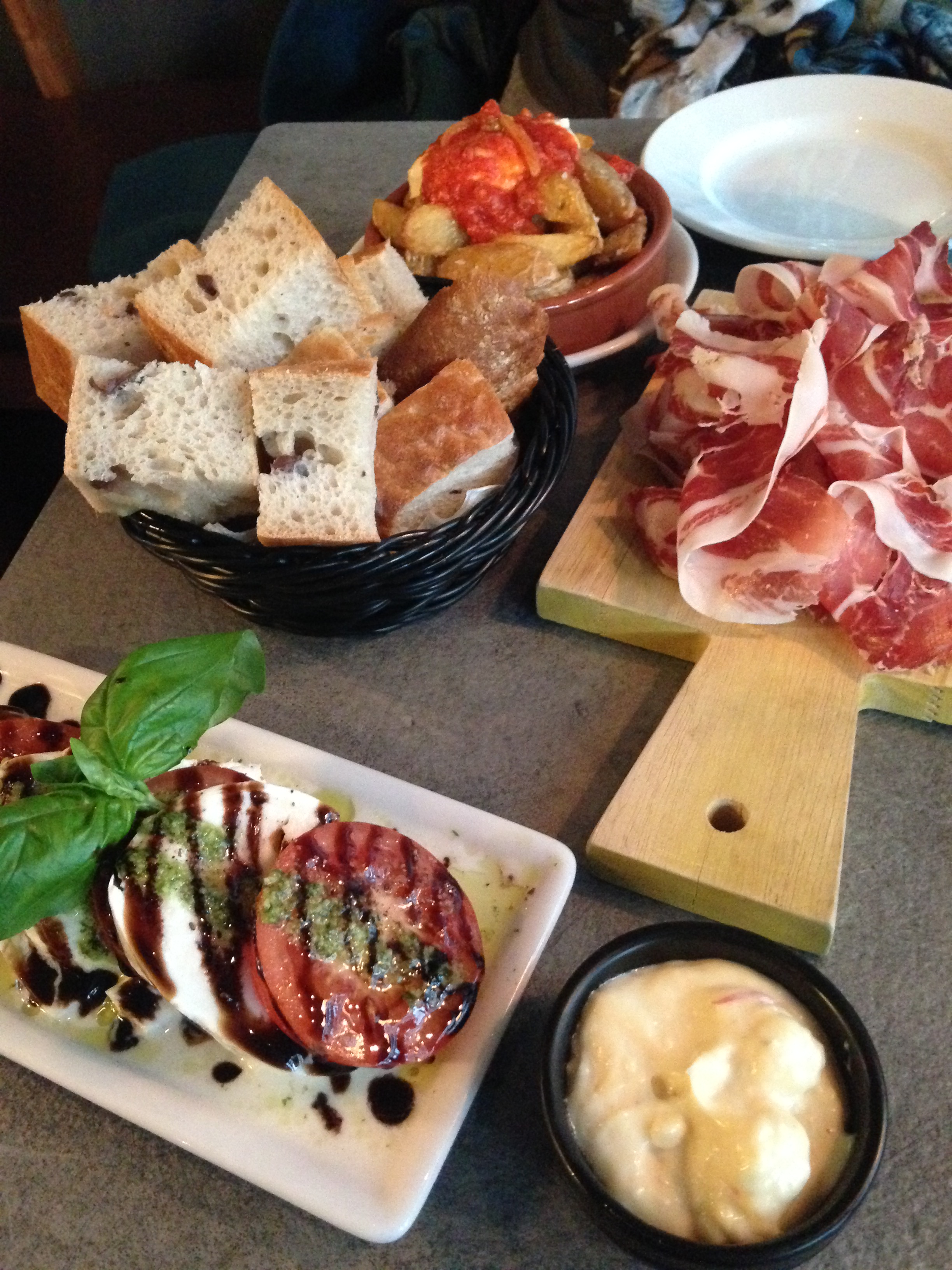 Sørenga Sjømat
We’ve only visited Sørenga Sjømat once, and one of the reasons why I add it on the list is that this restaurant needs help. Misunderstand me correctly – the food was great, but the huge newly opened restaurant was almost completely empty. And we fear it will stay that way unless they use large amounts of money on creative marketing. Because Sørenga is a summer place, and to open a huge fish restaurant (and fish shop) in this area in August instead of spring, seems like incredibly bad planning to me. But Oslo needs more good and accessible fish restaurants, so we encourage everyone to visit just to keep it alive. And the best thing is – you can order half portions of almost all the courses. Something which is unfortunately still a rare concept in Oslo restaurants.

Trattoria Popolare
The trattoria is one of André’s favourites. And even if wheelchair users have to enter via a ramped back entrance (knock on the window if the door is locked), we add it because we need a true Italian place on the list. Trattoria Popolare serves original Italian food in a very charming, but horribly noisy room with mirrors and black & white floor tiles. A romantic date place for people who knows sign language. Service is friendly and sometimes a bit weird. If the place is full (like during Oslo Marathon where every table in Oslo was taken) – put on your Bambi look and wink to the butler. He’ll find a solution! In the summer time they have a huge outdoor serving on the piazza, perfect for people watching on the East side.

Hungry now…eh?
Well, then you have a problem – because most restaurants in Oslo are closed on Sundays.

Come back another day & bon apetit!

Wheel the World – Up in the Air