Listen baby, ain’t no mountain high
Ain’t no valley low, ain’t no river wide enough baby
If you need me call me no matter where you are
No matter how far don’t worry baby
Just call my name I’ll be there in a hurry
You don’t have to worry
Marvin Gaye
Three days ago Facebook was so kind to remind me that it was one year since I went on the mountain trip of my life. I come from Norway, so I have seen and driven through mountains my entire life. But this was the first time I was actually going to the top of a big one. And I had to go to Switzerland to succeed with my mountain expedition. Because I’m not one of those people who you will see crawling on a pile of rocks on my knees to prove that “Yes, I can!”.
Kudos to those who do, but I prefer to do it the lazy way… 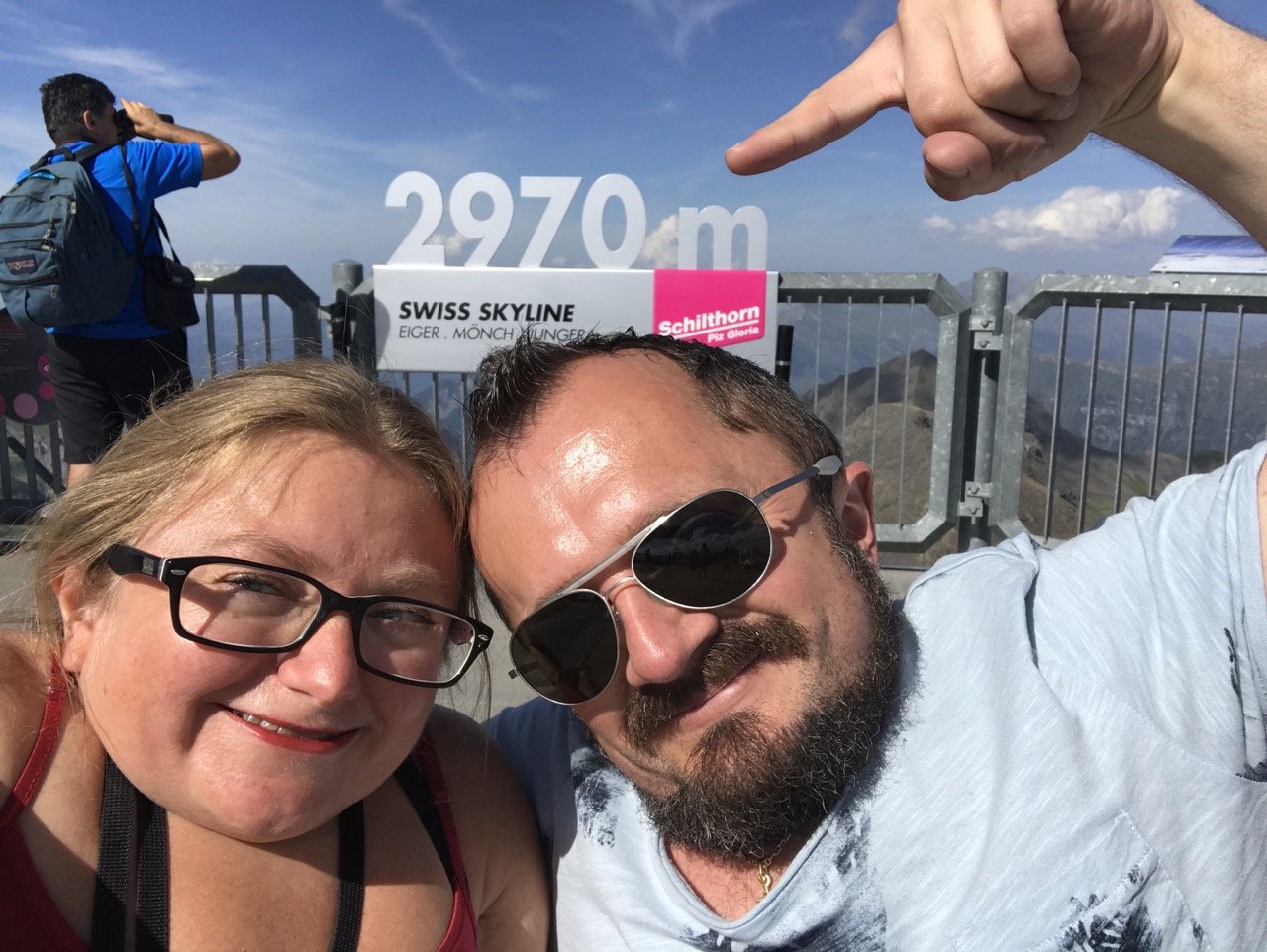 Switzerland is great for that purpose, because they have been so friendly to build cable cars to ascend several of their highest mountains. And not only that – they have been so kind as to make these establishments accessible for wheelchair users as well.
So on August 2nd 2017, we were going to the top of Schilthorn – a summit in the Bernese Alps of Switzerland. It overlooks the valley of Lauterbrunnen in the Bernese Oberland, and is the highest mountain in the range lying north of the Sefinenfurgge Pass. 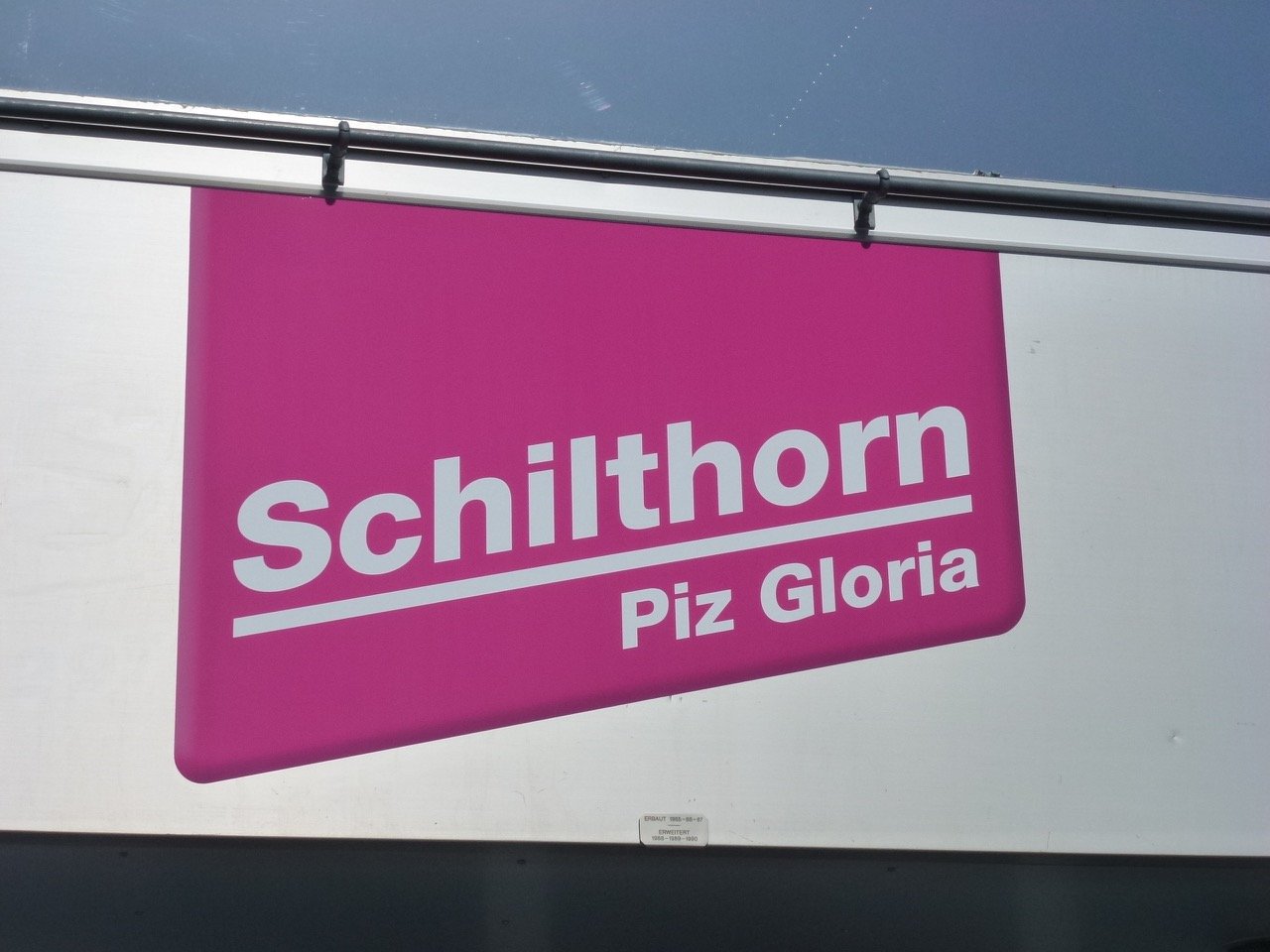 And André’s Swiss friends were kind enough to drive us to Mürren, where the first cable car station is situated. After André moved to Norway, we have no car to get around while in Switzerland. And I doubt that it’s possible to get close to Schilthorn by public transport. It seemed to be mostly private cars and tourist buses as far as I could see. But I did not really check.
At the parking place in Mürren one the first things you see are impressive walls of rock, stunning waterfalls, the first cable car and paragliders.
Look out!
The station at Mürren has an elevator to get up to the level where you enter the cable car, but between the ticket office and the 2nd level there is a long stretch of stairs. So either you buy tickets first and go out and around the building again. Or you can have your friends buy tickets for you, as we did. Right outside the station there were accessible parking.
In Mürren you find the first station of many. Because when you are ascending a mountain as high as 2970 meters, you cannot do it in one stretch. There are actually five stations to take you up to the summit called Piz Gloria, where there is a revolving restaurant and a James Bond museum…nothing less. But the logistics works pretty well (Swiss style) even if there are a lot of confused tourists around.
Schilthorn was one of the mountains where they shot the famous cable car scenes in one of the earlier James Bond movies. And because of that they decided to build a Bond museum at the summit. Nothing wrong with a little help on the advertising, is it?
The entrance to all the four cable cars is level free. There might be a small gap – but it should be possible both with manual chairs (as we had) or electrical wheelchairs.
So it’s smooth sailing. The biggest challenge you might face at Schilthorn are Asian tourists in a hurry. Because there was no mercy when waiting for the elevators to take us up to the restaurant. The Asians wanted to go first. And they squeezed together – in good old fashioned Tokyo subway style. We were not in a hurry, and had no need to be squeezed in the elevator sandwich. So we waited…
The first thing we did, when we reached the top was to have a meal in the revolving restaurant. There is however one high (moving) step to get down to the tables with the best view – so be aware of this if you bring an electrical wheelchair or poor balance. 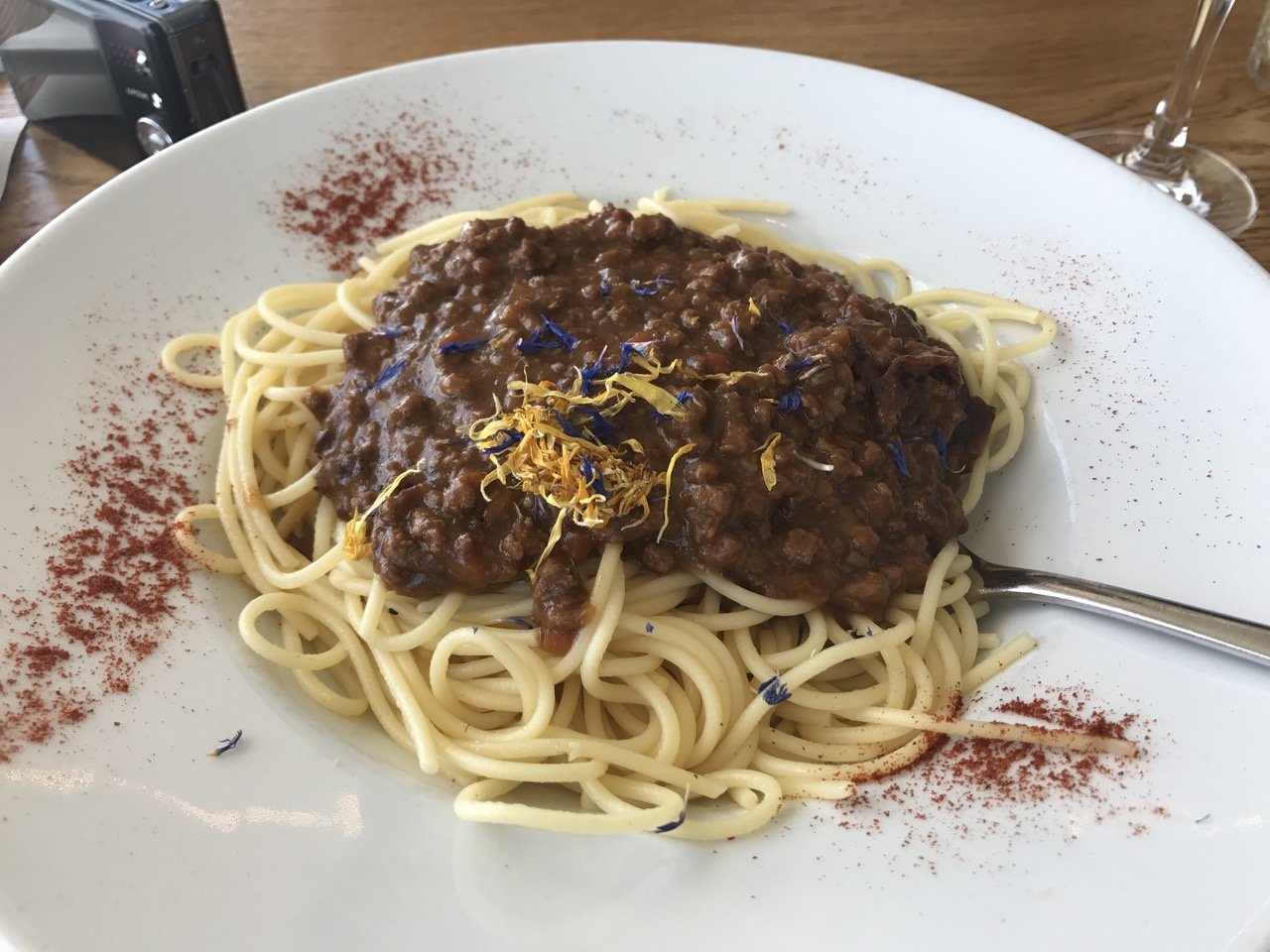 While you eat a better (but touristic) meal, you can enjoy a 360 panorama view of a very impressive mountain chain. It takes around one hour for the restaurant to go all the way around. And even if it’s a strange feeling – it does not go so fast that you get dizzy. Unless you drink too much wine of course…
After that you can go outside to the viewing plattform. Where you also have a more or less 360 degree viewing possibility to the same area.
Some of the plattform is painted in pink, to give you as good photo reflection light as possible when taking your selfies with the mountain background. We got some help from a fellow tourist, because we didn’t have the essential accessory…the selfie stick. 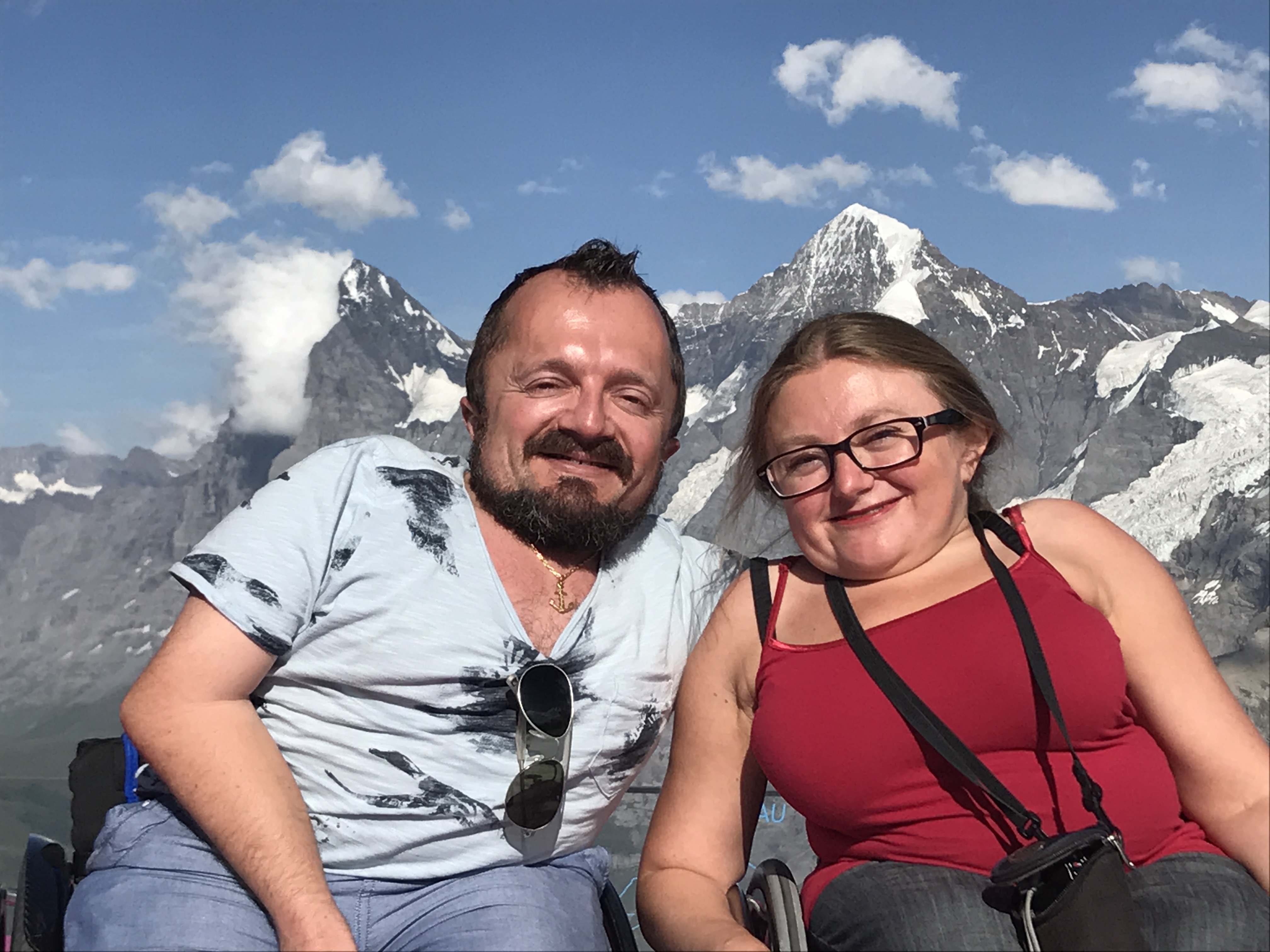 Looking good, heh?
After taking our time to watch the magnificent view and taking the elementary selfies,  we also checked out the Bond museum. Fun! But to be honest – it’s the view I will remember and not the museum…
I cannot really remember if there were accessible toilets – but I’m pretty sure there were.
And then it was time to descend. We had the ‘premium seats’ this time. I had butterflies in my stomach because I’m a little bit afraid of hights. But it’s hard to beat that view! 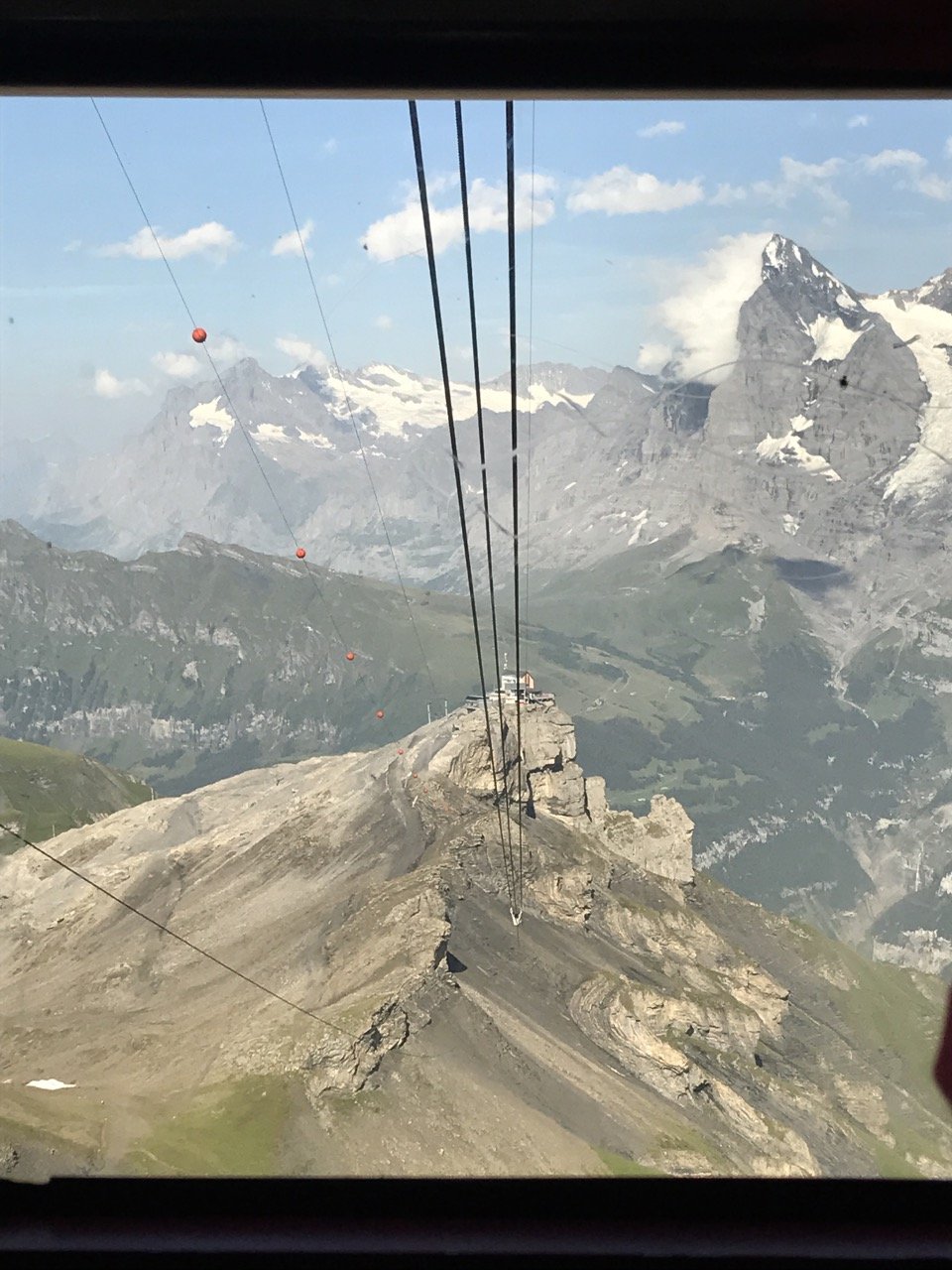 And when we were safely on the ground again, all the participants agreed that it had been a very nice day for a trip to the mountain top. 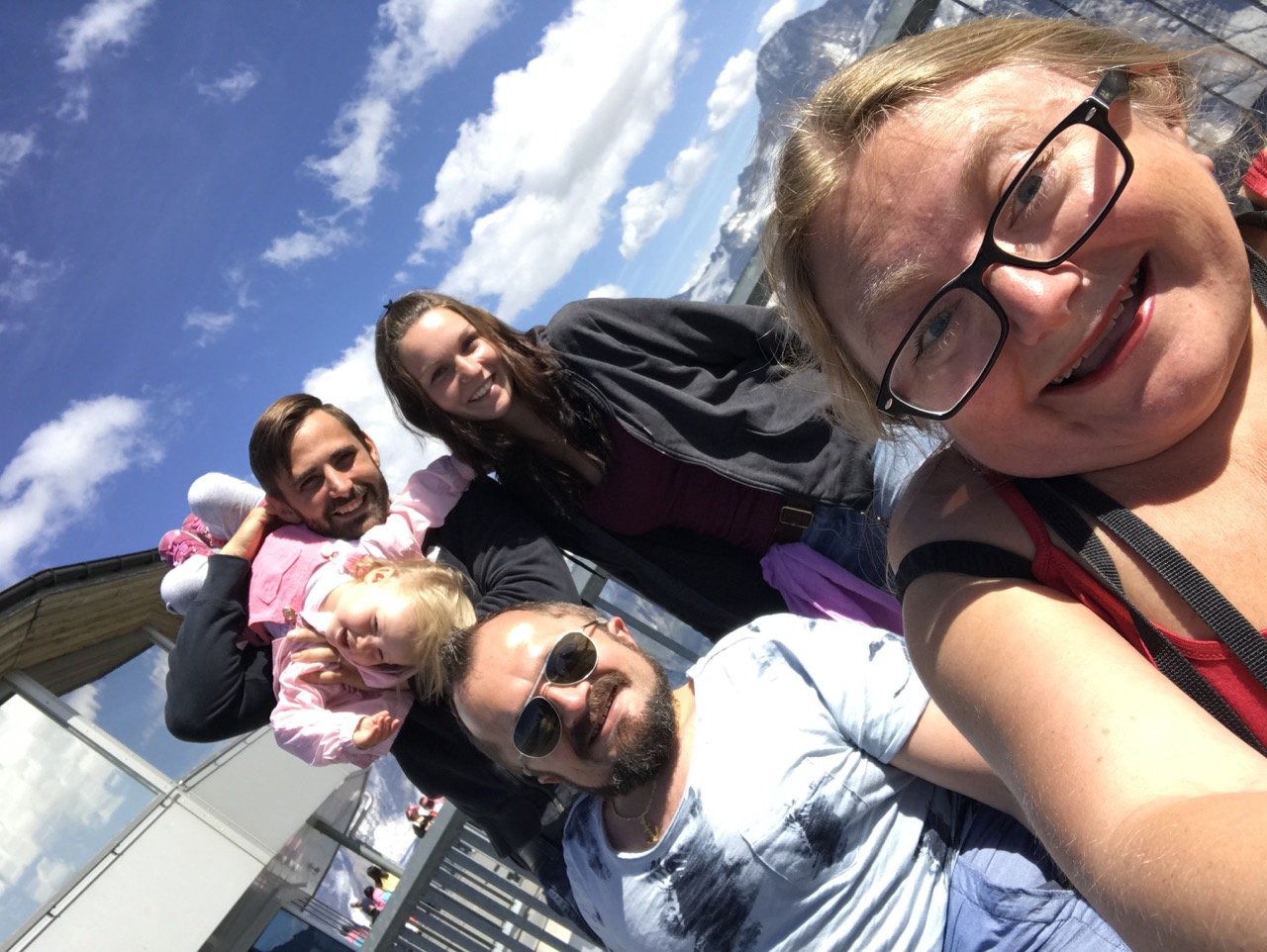