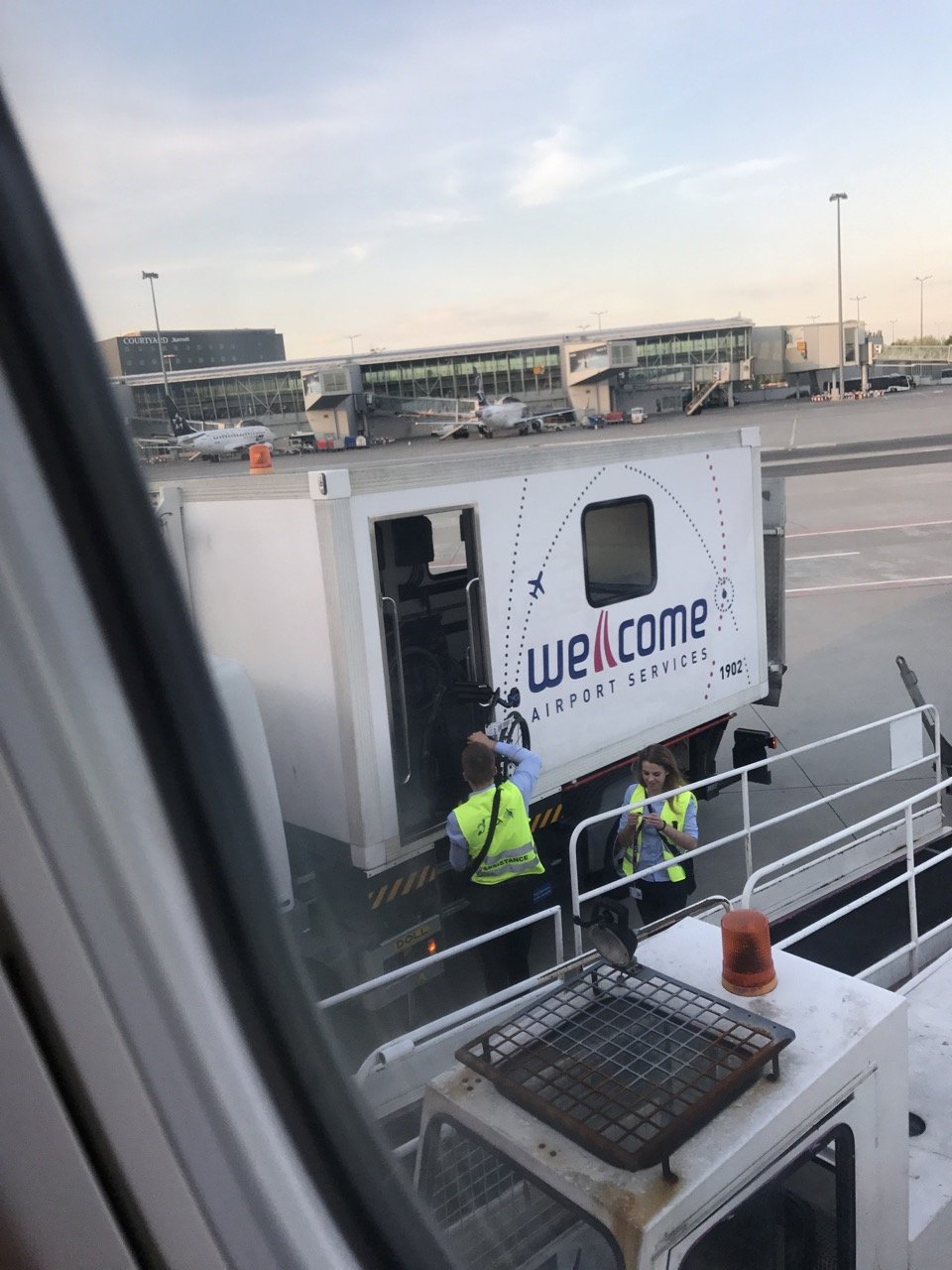 Yesterday I sent the delegates a reminder about OIFE’s Annual General Meeting (AGM) 2018. This made me think of our visit to Warsaw (Warzawa), Poland in May 2017, which happened because of our 2017 AGM, that took place exactly one year ago. The Polish OI-organisation were our hosts. 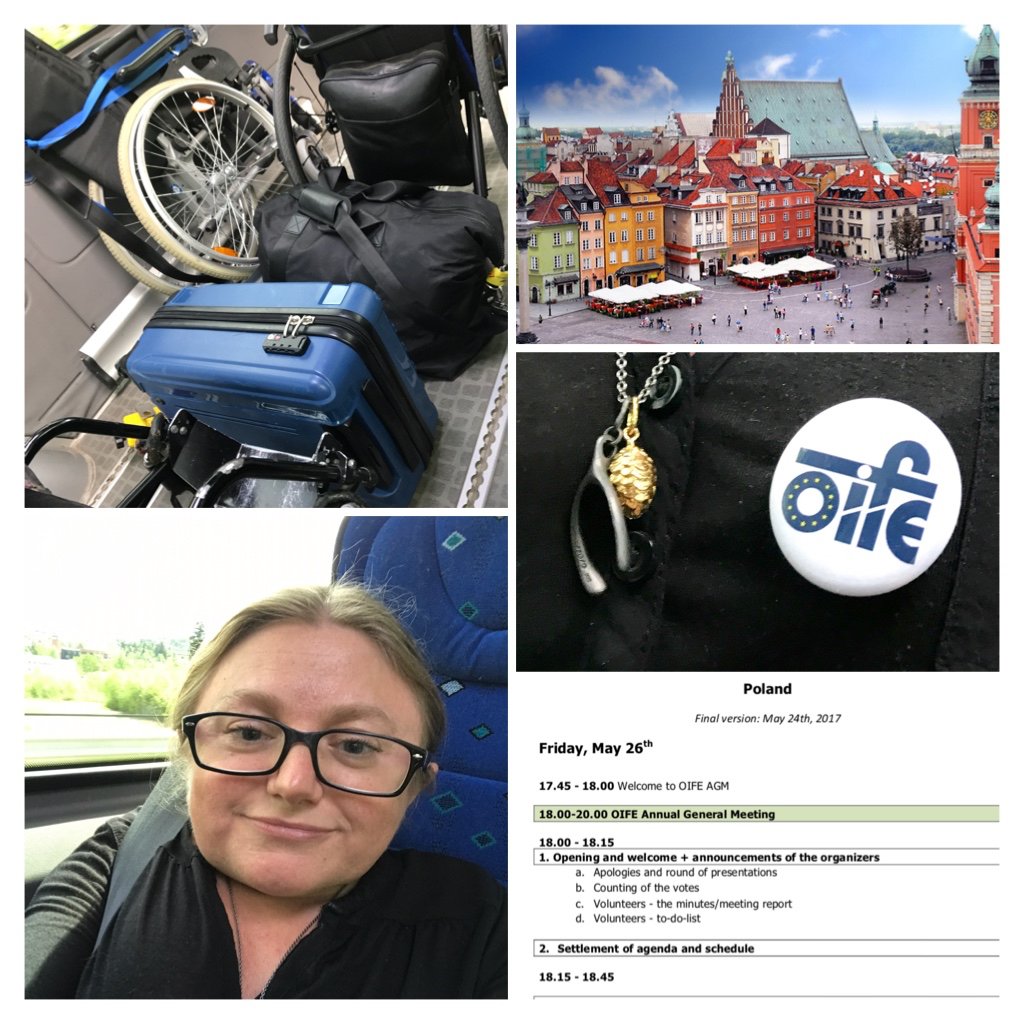 I’ve always had the impression that Polish people are a bit reserved and hard to get to know. There are almost 100.000 Polish people in Norway and they seem to spend time mostly with other Polish people. Perhaps it’s a language thing. Or perhaps they just don’t want to waste time on silly Norwegians, when they can use their time on earning good money instead. Because my other preconception about Polish people is that they are proud and very hard working people.

Before the meeting, the Polish OIFE-delegate Aneta had searched the city for hotels that could cater for 10 wheelchair users or more. This turned out to be a challenging task. Hotels in Warszawa are not very expensive, but they don’t have a lot of wheelchair accessible rooms. Fortunately Best Western Hotel Portos had three wheelchair accessible rooms and the other rooms were also doable. In addition the places next door (a two star hotel and a one star) could also offer a couple of wheelchair accessible rooms if needed. The wheelchair rooms in Best Western Portos were very accessible and had some nice universal design details like adjustable mirrors and wardrobe hangers that could be lowered. Of course this resulted in me forgetting my leather jacket in Poland. Both because the weather in Warzaw was nice, but also because I could actually use the wardrobe hangers. Something I never do…

But thanks to a collaboration between my Polish and Norwegian travel friends, I got my jacket back a few months later. It came together with my tempur travel pillow, that I have become completely addicted to and tend to forget in various places.

Another not so charming “disability access feature” in Best Western was plastic under the sheets in the beds. Perhaps some disabled people need that, but I think they belong to a minority. It reminded me of hospital and was sticky and uncomfortable to sleep on. But besides the plastic sheets, Best Western hotel provided a very pleasant stay with good & flexible service and tasty food.

And I had no reason to worry about how we would get to know the Polish people. Both the hotel staff and the Polish OI-organisation did their best to make us feel welcome with tasty food, drinks and they had even written a special song for our honorary president. So even if there were some smaller language barriers, we felt truly welcome. Dziękuję! (Thank you in Polish).

But relax, I will not bore you with details from our discussions about strategy and financial reports from our AGM. André and I arrived one day early and stayed one day extra, so we had some time for sightseeing as well. We were curious how it would be to move around in the Polish capital with a wheelchair, but it turned out that we had no reason to worry. Yes, the old town in Warzaw has a lot of cobble stones (so we did not check out much of that), but the rest of the rather flat city has broad streets, avenues and sidewalks with perfect curb cuts.

It was absolutely no problem to move around with the wheelchair. The great challenge however, was to find a wheelchair accessible toilet. We never really found a “big accessible toilet”, but we found a normal toilet that was big enough in an waffle & ice cream shop with one small step to get in.

If you are tired of wheeling Warsaw, taxis are cheap. And from the Best Western Hotel it cost around 10-12 euros to get to the city centre. There was also tram and bus available, and they were both supposedly accessible, but we never tried. 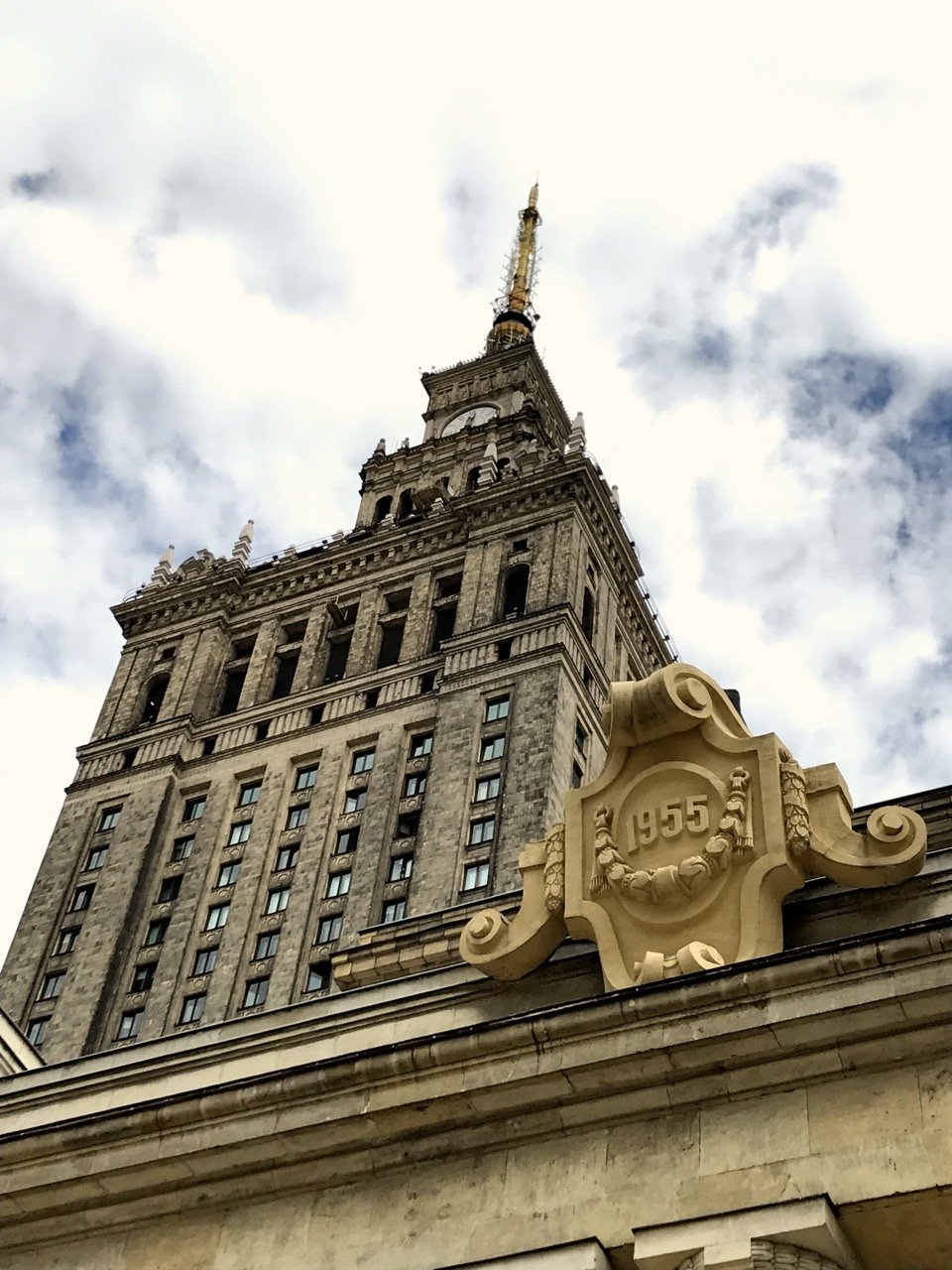 On our first sightseeing trip to the city centre, we asked the taxi to let us out by the Palace of Culture and Science. This is a big skyscraper resembling the Empire State Building in New York, containing a lot of different stuff like museums, concert halls, schools, restaurants and a viewing terrace at the top. On the outside the building is very impressive, but on the inside it was more or less confusing. We spent some time looking for an accessible entrance, that we found in a hidden “back alley”. After going through some corridors, we found the tourist area, where we tried to communicate with a security guard and ask him how to get to the viewing terrace. With a mix of Polish & sign language, we understood that we had to take a special elevator to go to the viewing terrace at the top. When we got there however, we realized that there were 6-7 steps to get down to the viewing terrace and restaurant.

We were then approaced by another security guard, who we finally understood, was trying to explain that he had a device (“stairclimber”) to help us down the stairs. Since I’m allergic to these devices after some painful airport experiences, we decided to skip the viewing terrace and go explore on the outside instead. We had already wasted an hour by figuring out the different entrances and elevators in this impressive but totally confusing building. I am sure there are potentially interesting things to be seen there, as the doll house museum for instance. But I think it’s an advantage to bring an assistant and a local guide who speaks Polish.

After palace of confusion, we decided to be boring tourists and have a snack at Hard Rock Café, which is probably one of the more expensive restaurants in Warzaw – a city where you can sleep, eat and drink for a very reasonable price if you investigate a little. We actually paid less than 30 euros for the room the last night in Best Western!

Hard Rock Café is situated in the modern business part of Warzaw with skyscrapers and modern architecture. One of the skyscrapers was missing a piece though. Maybe somebody stole it…?

Our next visit to the city centre was Sunday afternoon, after the meeting was finished. The taxi driver let us out by the Sigismund’s Column, a huge landmark from the 17th century. This is the entrance to the old town and also the start of an area with cobblestone streets, squares and alleys. It looked pretty charming, but André is allergic to cobble stones because of some tricky front wheels. So we decided to have a glass of wine, enjoy the ambience and head in another direction afterwards.

We wheeled in a relaxing Sunday tempo through the streets of Warsaw, passing a lot of old distinguished buildings, statues and parks. People were out in the streets doing different activities and we observed everything from strawberry salesmen, religious chanting & dancing to a demonstration for something we never understood what was. Perhaps also something religious? Polish people are good Catholics and it’s not unusual that you can see Polish people queueing outside the few Catholic churches in Oslo, where the protestant church have more of a marketing problem.

Enough about religion. I would definitely recommend Warzaw as a destination for a spring break. But if you are totally dependent on using a wheelchair accessible toilet, I would probably do some research in advance.

In a future blogpost I will tell you about the best & worst of Warzaw.

Wheel the World – Up in the Air